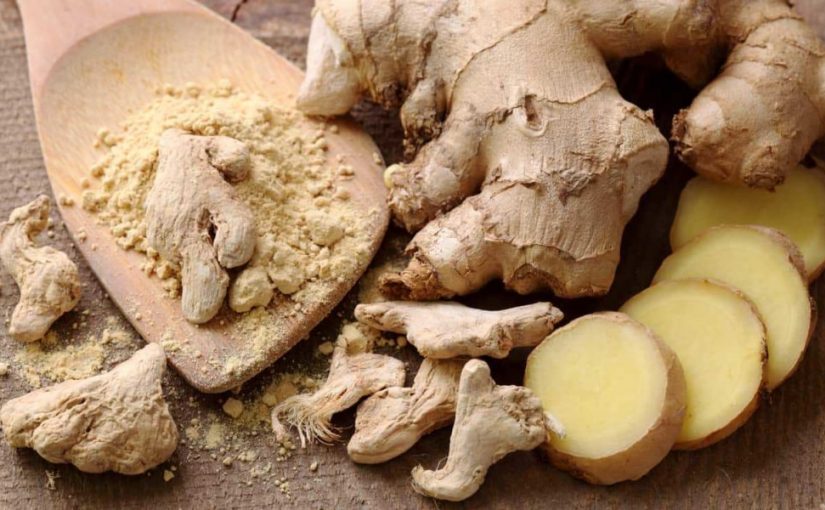 Ginger (Zingiber officinale) is a plant belonging to the family Zingiberaceae alongside turmeric (Curcuma longa) and cardamom (Elettaria cardamomum).

Originating from South East Asia, it’s a rhizome (often referred to as ginger root) has been used for ages for both culinary and medicinal purposes. It has a strong unique smell as well as flavour.

Packed with highly beneficial phytonutrients, ginger is one of the most healthy spices in the world. It contains 2 potent bioactive substances– Gingerol and Shogaol. In fresh ginger, Gingerol is the most active biochemical ingredient. It gives its unique spiciness. Gingerol has anti-cancer, anti-fungal, antioxidant, anti-inflammatory, and gastroprotective properties. Thus, it provides the majority of the medicinal benefits of ginger.

Shogaol is the ingredient responsible for the pungent smell of ginger. When fresh ginger is dried, Gingerol is dehydrated to form Shogaol. This is why dry ginger is more pungent than its fresh counterpart. It is noteworthy that African dry ginger contains more gingerol and shogaol compounds than the Asian ginger making it more potent either as a spice or medicine.

It provides relief from a sore throat, nasal congestion, and cough

The pain associated with a sore throat is as a result of inflammation in the throat which is often caused by an infection. Ginger soothes the pain and provides some relief.

The antioxidants found in ginger fight pathogens present in the throat that could be causing a cough while also relaxing the respiratory muscles that tighten when coughing. During nasal congestion, the gingerol found in ginger thins out the mucus and reduces its production easing the discomfort the person may be suffering.

Nausea is an uneasy feeling that often comes with the urge to throw up. A lot of conditions could cause one to feel nauseated such as morning sickness in pregnant women, motion sickness, a stomach infection, food poisoning, emotional stress, and so on.

Dry ginger is very effective in easing the symptoms of nausea. Research has proven that ginger is more effective in fighting nausea than medications and has fewer side effects. It does this by maintaining a stable digestive function and regulating the blood pressure to keep the body calm.

Ginger can treat stomach indigestion and other stomach-related issues

Ginger is a great remedy for stomach indigestion. Indigestion– medically known as dyspepsia– is any form of discomfort or pain in the upper abdomen. Symptoms may include abdominal pain, bloating, belching, and an acidic taste in the mouth.

Studies have shown that even little doses of ginger can relieve abdominal pain related to indigestion. Ginger boosts the secretion of saliva and gastric juices to aid proper digestion. It quickens the movement of food through the digestive tract which helps to reduce cramps, irritation as well as constipation. It’s anti-inflammatory effects block enzymes that could lead to bloating.

Ginger also helps to reduce the amount of gastric acid in the stomach which could be responsible for indigestion as well as the acid reflux related to it. By preventing the acid from flowing up into the oesophagus, ginger reduces the chances of gastric acid getting to the mouth and leaving a nasty taste there.

It could help with weight loss

Ginger boosts metabolism. This helps in burning off excess fat thus resulting in weight loss. Consumption of ginger has been linked with suppression in appetite, lower cholesterol and blood sugar level. It could even reduce the buildup of fat in the arteries which contributes to high blood pressure.

Ginger has been shown to help overweight people stay fuller for longer. This prevents them from having hunger pangs that will result in eating more food than could set back weight loss. Ginger can also help in burning fat in specific areas like the belly. It has a very significant effect on the waist-to-hip ratio.

Ginger improves the health of the skin and hair

Topical application of ginger on the skin has several benefits. It’s antibacterial and anti-inflammatory effects can be used to prevent skin issues such as acne. A ginger face mask will help unclog pores and kill any bacteria that could lead to the formation of acne on the face.

Ginger is also very helpful in treating hypopigmented scars i.e scars that are lighter than the skin tone. It rejuvenates dull-looking skin by fighting free radicals and boosting collagen production which in turn improves the elasticity of the skin giving it a healthy glow.

The hair also stands a lot to gain from ginger. Ginger fights dandruff and remove all crusty flakiness in the scalp. Ginger is used to treating bald spots on the scalp as it boosts the growth of hair from follicles. It also moisturizes the scalp, makes the hair shiny and thicker.